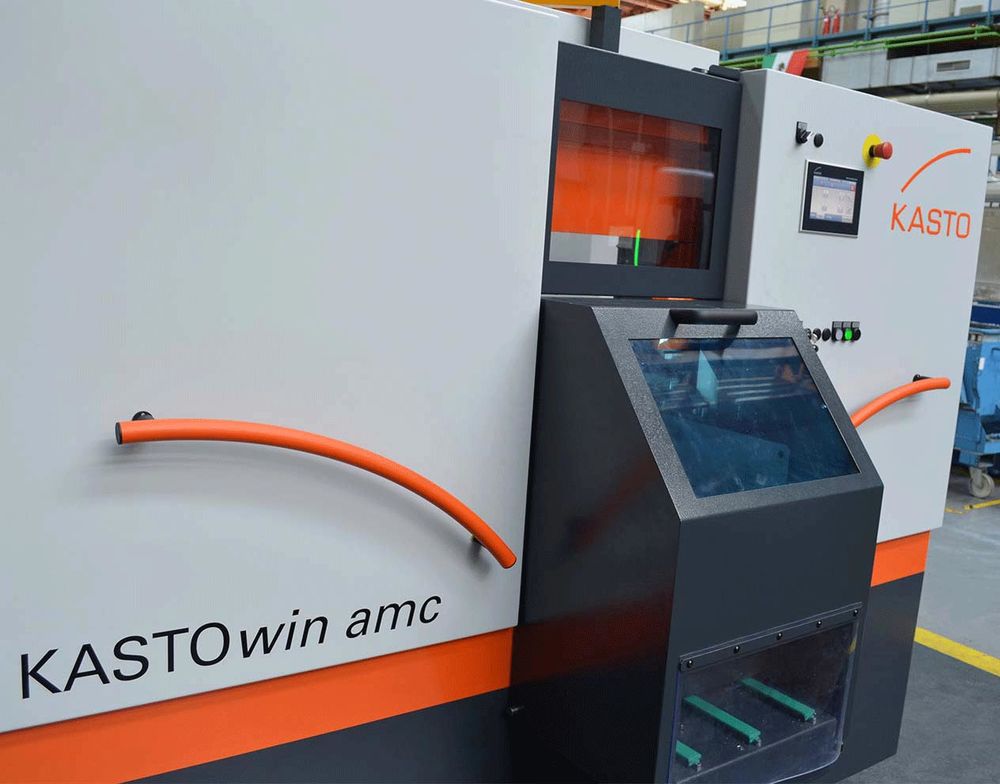 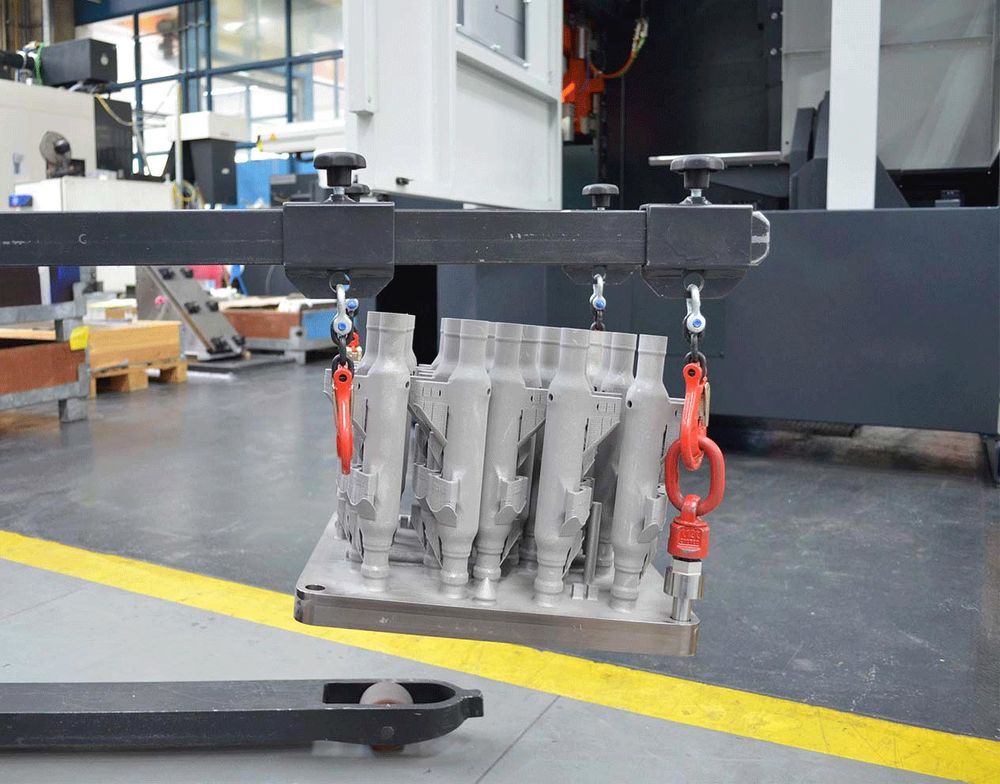 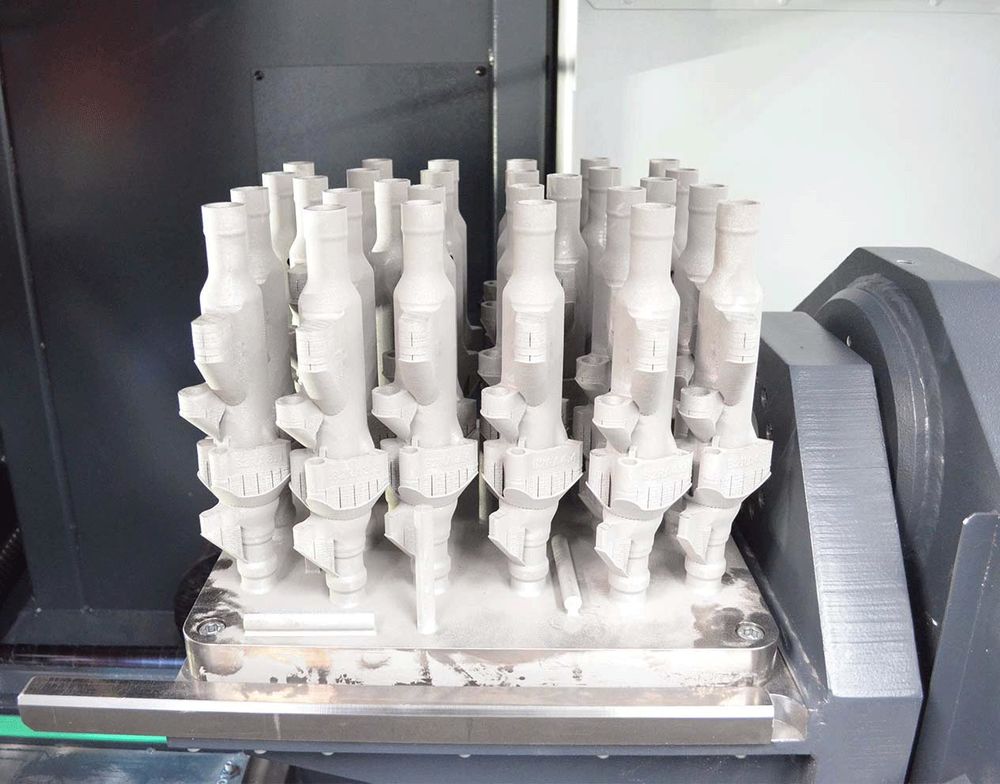 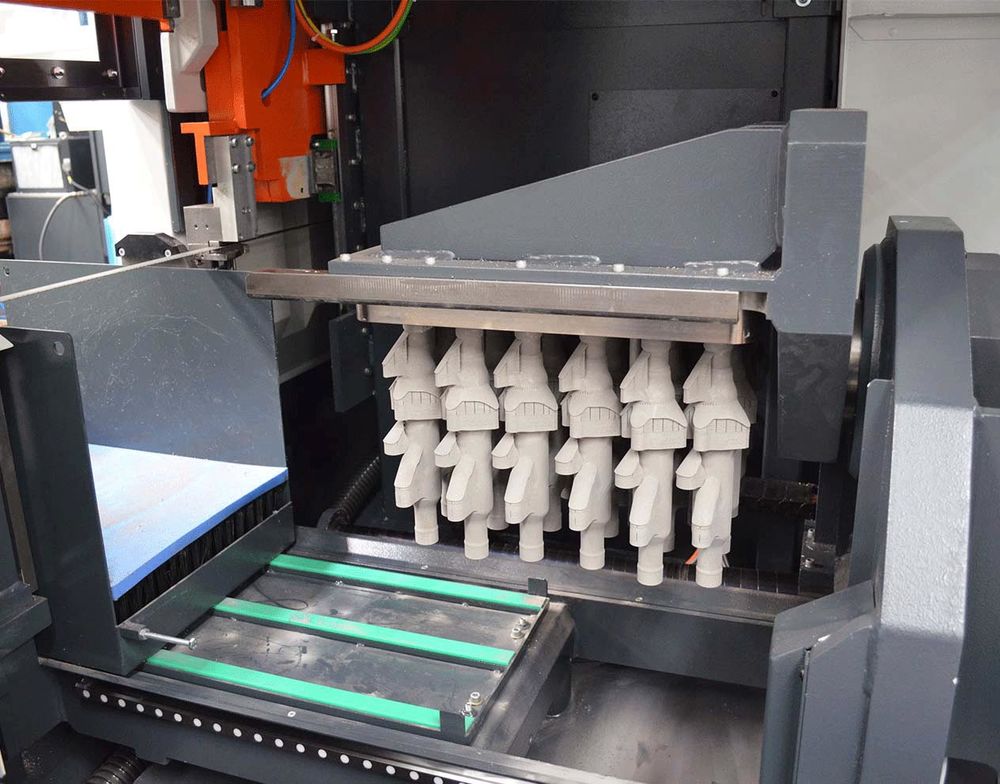 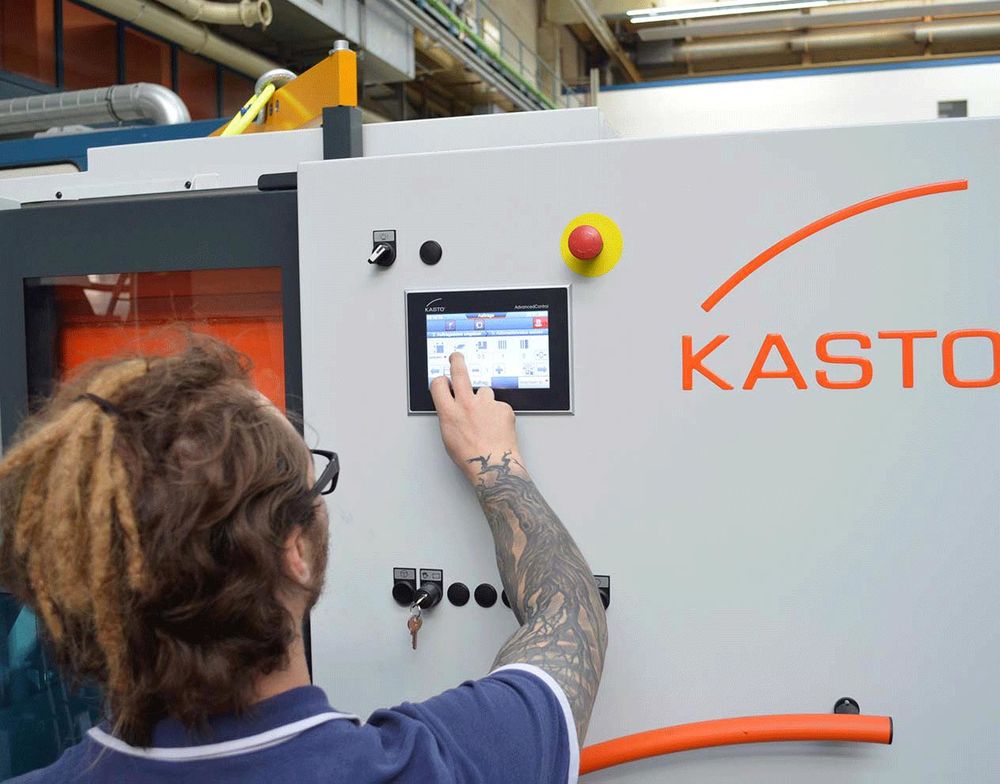 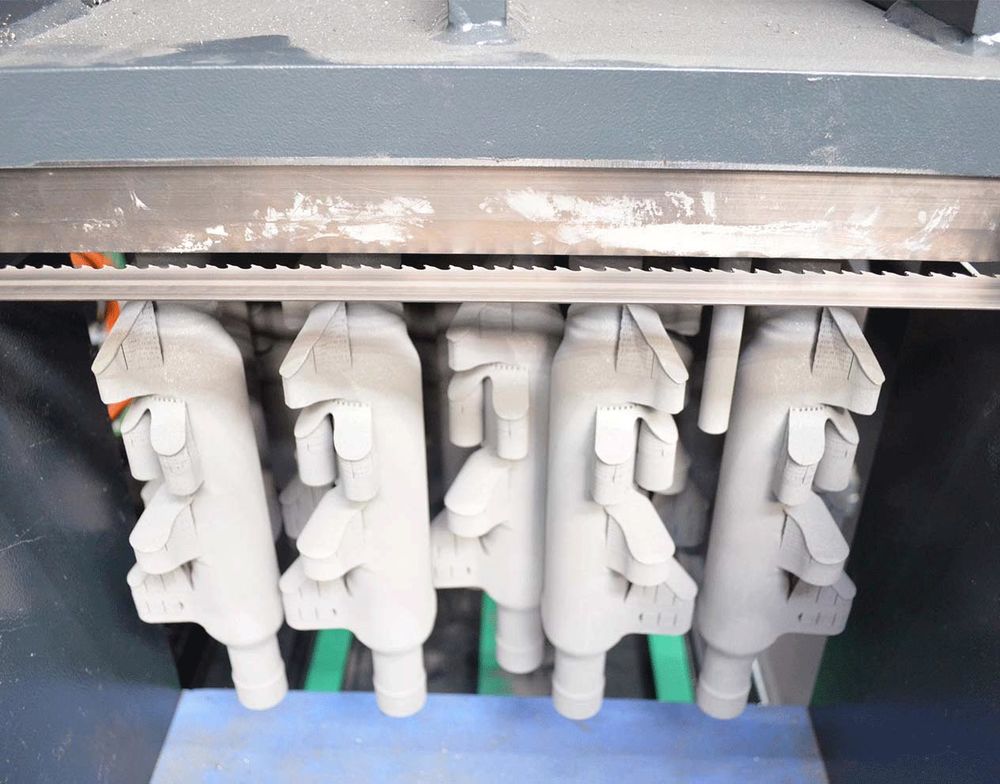 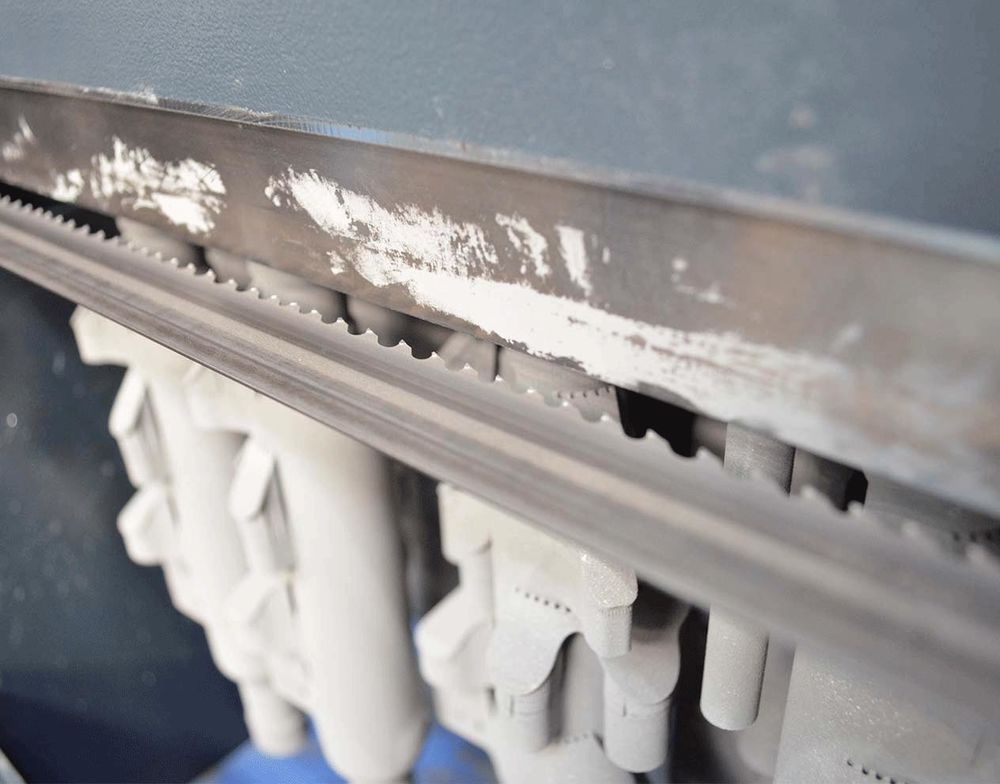 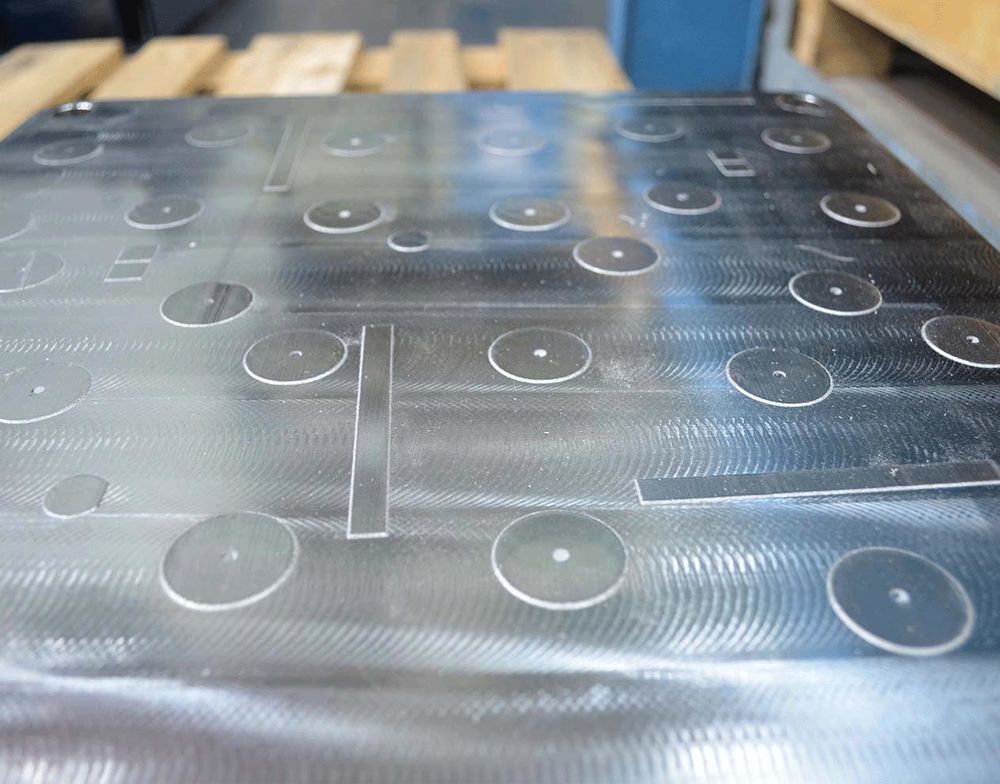 Headstand for the perfect shaft

To save time and costs during the production of aircraft components, Airbus Helicopters, which is headquartered in Donauwörth in Bavaria, has recently turned to additive manufacturing. After manufacturing the titanium components in the 3D printer, the next step is to separate them from their baseplate. This is done using the fully automatic KASTOwin amc bandsaw. This KASTO machine has been specially designed for use in the world of generative manufacturing and excels thanks to its economical, user-friendly sawing process which has been designed to avoid damage to the workpiece.

There is barely any other sector that takes the issue of lightweight construction as seriously as the aviation industry – and with good reason: Every gram that can be trimmed off an aircraft’s weight helps achieve considerable long-term fuel savings. This benefits both airlines and also the manufacturers, who are able to compete for orders by offering ever more lightweight constructions. However, aircraft components not only have to be light; they also have to be stable and absolutely reliable. That is why special high-tech materials and innovative manufacturing methods are becoming increasingly widespread in the production field.

Airbus Helicopters is also consistently searching for innovative lightweight construction solutions. The company, which has its head office in Donauwörth in Bavaria, is part of the Airbus Group, Europe’s largest aviation and aerospace company. The site, which has a workforce of approximately 7,000 employees, not only develops and produces a range of helicopter models such as the H135 and H145, but also specialises in the manufacture of aircraft doors. In Donauwörth, Airbus Helicopters manufactures more than 4,000 passenger and cargo doors every year.

Layer after layer: Manufacturing components in the 3D printer

As of recently, Airbus has been using an additive manufacturing process to produce shafts for locking these doors. The titanium component is created in a 3D printer, which applies layer after layer of the powdery input material to a baseplate measuring 400 x 400 millimetres. The fact that walls of the shaft are thin and that it has a complex geometry makes this manufacturing method particularly suitable. It cuts production costs as well as work and effort – and the most important thing of all: Sixteen of these components are installed in every A350. That adds up to a saving of slightly more than four kilograms per plane.

When the printing of the components is finished, they must be separated from the baseplate, which is also made of titanium. To perform this process, Airbus has invested in the KASTOwin amc fully automatic bandsaw. The KASTO machine has been in operation in Donauwörth since October 2018. What makes it so special? It has been specifically designed for the machining of additively manufactured parts.

An employee uses an electric lift truck to remove the baseplate and shafts, which can weigh up to 40 kilograms, from the 3D printer, transports it to the saw and places it on the clamping mechanism. Here, the plate is fastened in place extremely securely with thick screws and the machine is locked so that no fine dust can escape. What happens next is rather unusual: The entire mechanism rotates through 180 degrees for the sawing operation and the components are therefore sawn upside down. This concept is unique and offers considerable advantages for additive manufacturing. After being cut, the parts cannot topple over or buckle – this prevents damage that could lead to time-intensive reworking or even expensive scrap levels.

Before the sawing operation begins, the employee measures the thickness of the clamped baseplate and enters this using the job wizard of the AdvancedControl machine control system. The top part of the saw, which is equipped with a high-precision ball screw spindle drive, then moves to the exact height required. Because the plates can be reused many times and are ground flat again after each operation, they become thinner the more they are used. The intelligent control system makes it possible to saw the parts precisely to the corresponding dimensions on each individual operation. This also reduces the reworking effort and saves material – a cost factor that should not be underestimated when working with a material such as titanium.

When cutting is complete, the shafts fall into a container specially provided for this purpose. This is padded to prevent any damage to the parts. The operator removes them through a flap so that they can pass on to the next machining step. The KASTOwin amc is fully enclosed to prevent the ambient air from becoming contaminated with tiny particles, which are detrimental to health and may arise during the machining of additively manufactured components. The machine is also prepared for the connection of an extraction system. It therefore also complies with the most exacting requirements regarding occupational safety and operator protection.

Before opting for the KASTO machine, Airbus’s decision-makers conducted a number of trial cuts at the saw technology specialist’s premises at Achern in Baden-Wuerttemberg and were very impressed by the results. In addition, sawing the titanium plates proved to be significantly more cost-efficient than alternative machining methods such as milling or electrical discharge cutting. Compared to other plant and machinery in the giant factory hall, the KASTOwin is also extremely compact and space-saving. It is easy to use and is greatly appreciated due to its short cutting times and the outstanding results it achieves.

For Airbus, the changeover to the 3D printing process and the acquisition of the KASTOwin amc have already paid for themselves: The shafts, which will subsequently be used to lock aircraft doors, are 45 percent lighter and 25 percent more economical to manufacture than conventional components. Airbus Helicopters currently manufactures approximately 2,200 of these titanium components at its factory in Donauwörth. The additive manufacturing of other components is also planned for the future – meaning that the KASTO saw will play an even more prominent role in the production process.