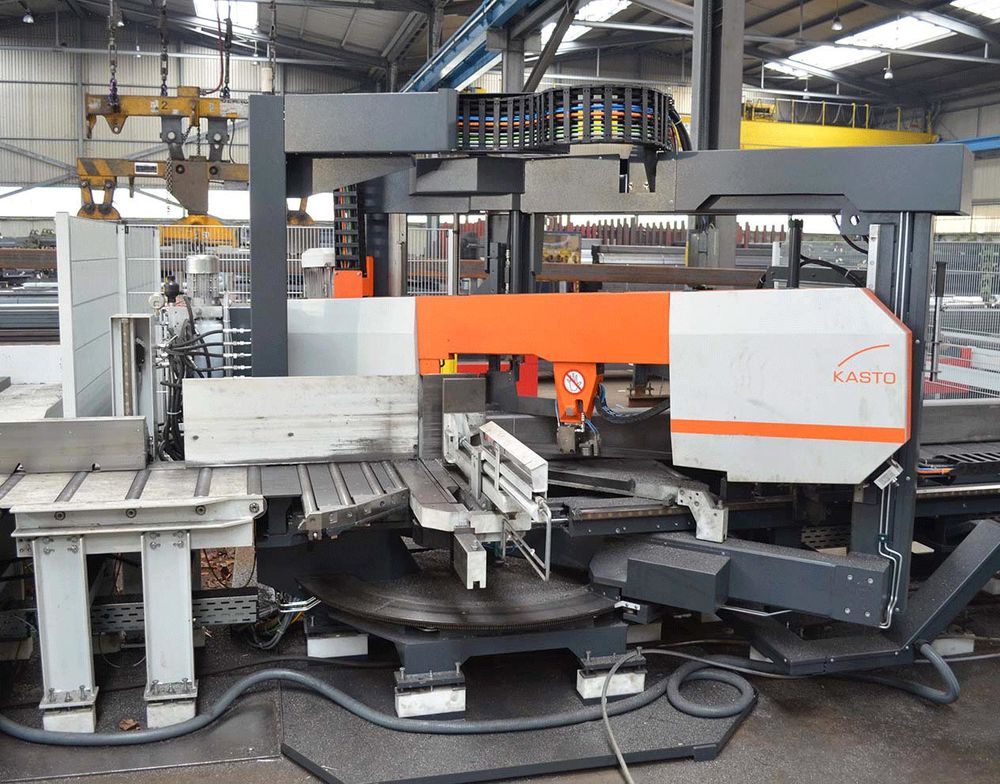 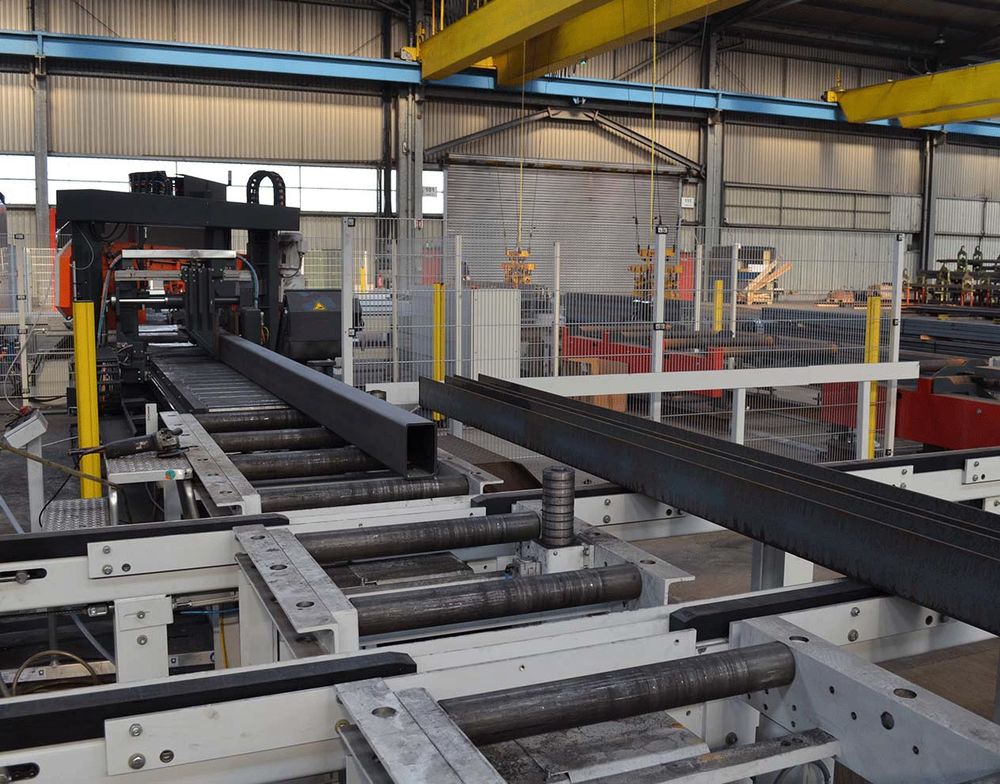 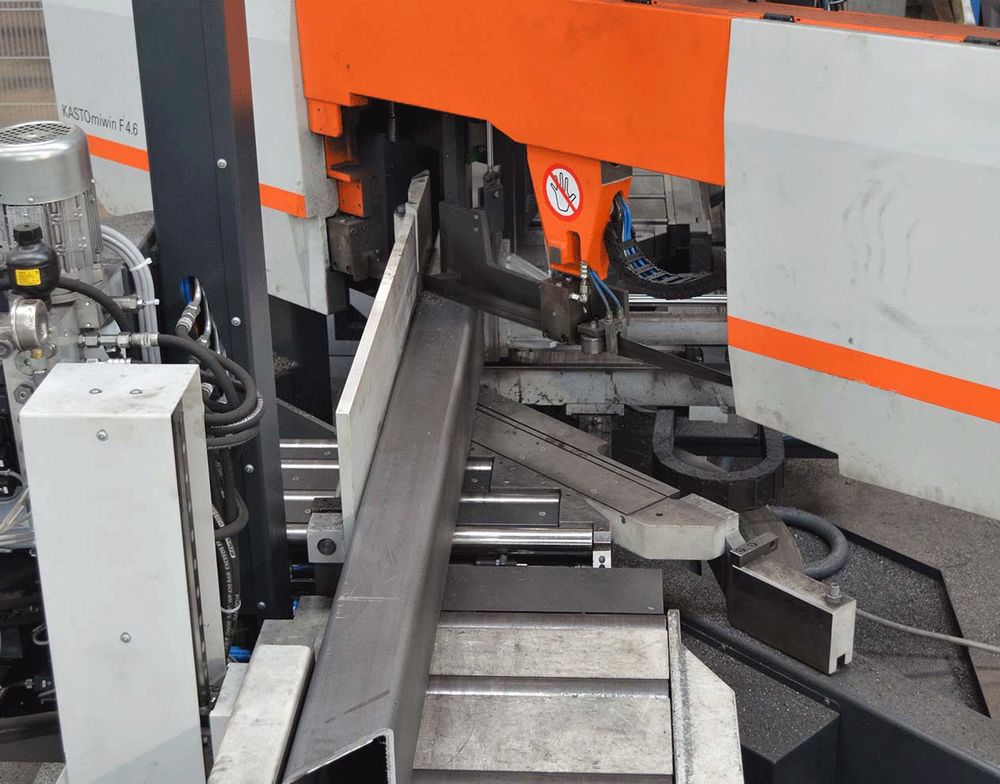 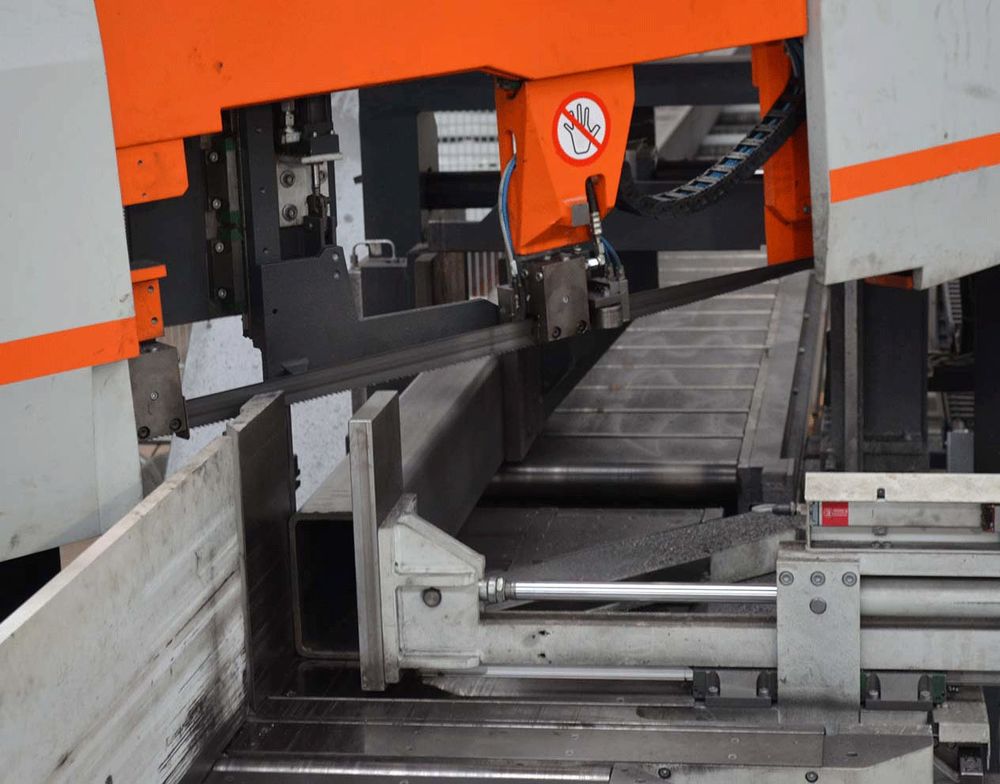 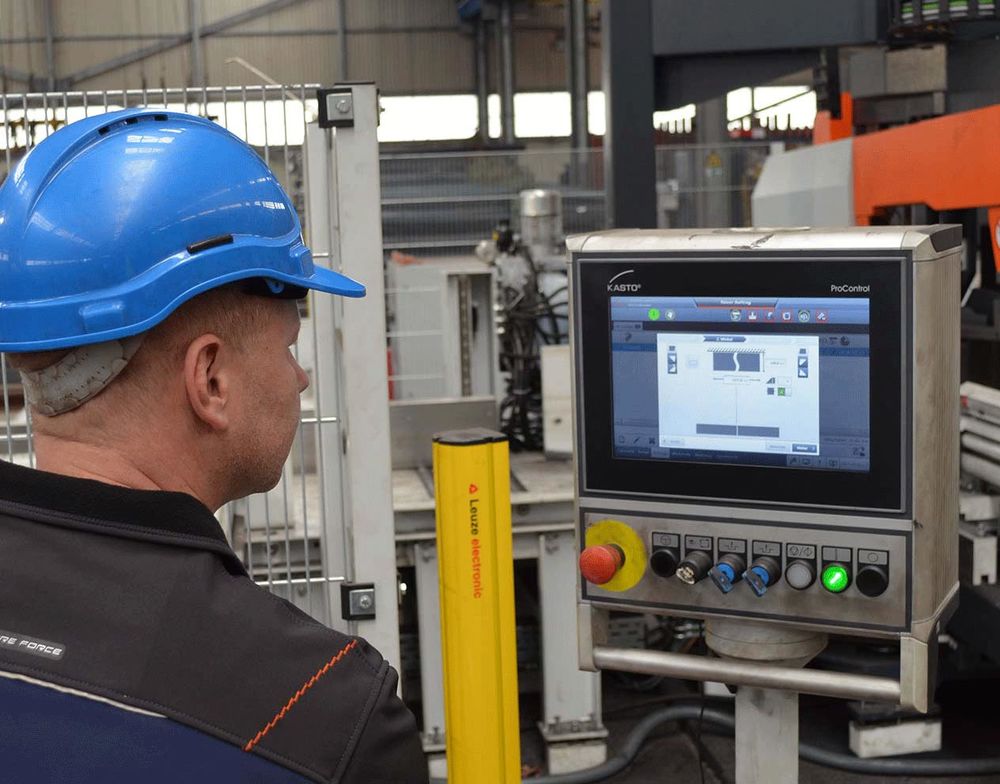 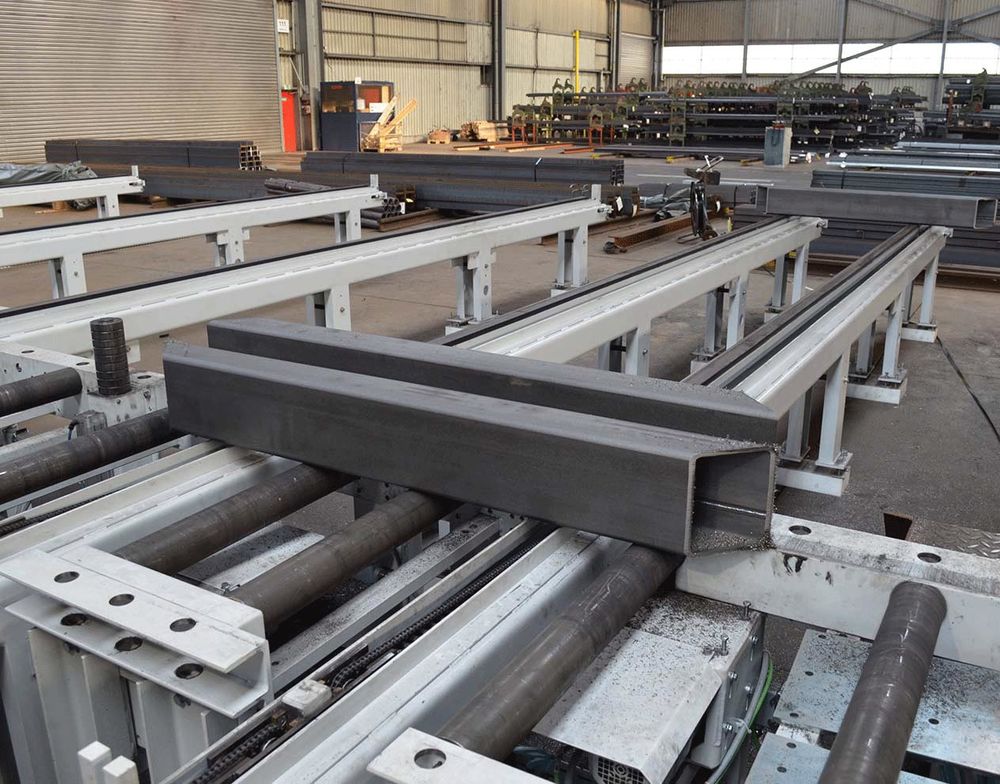 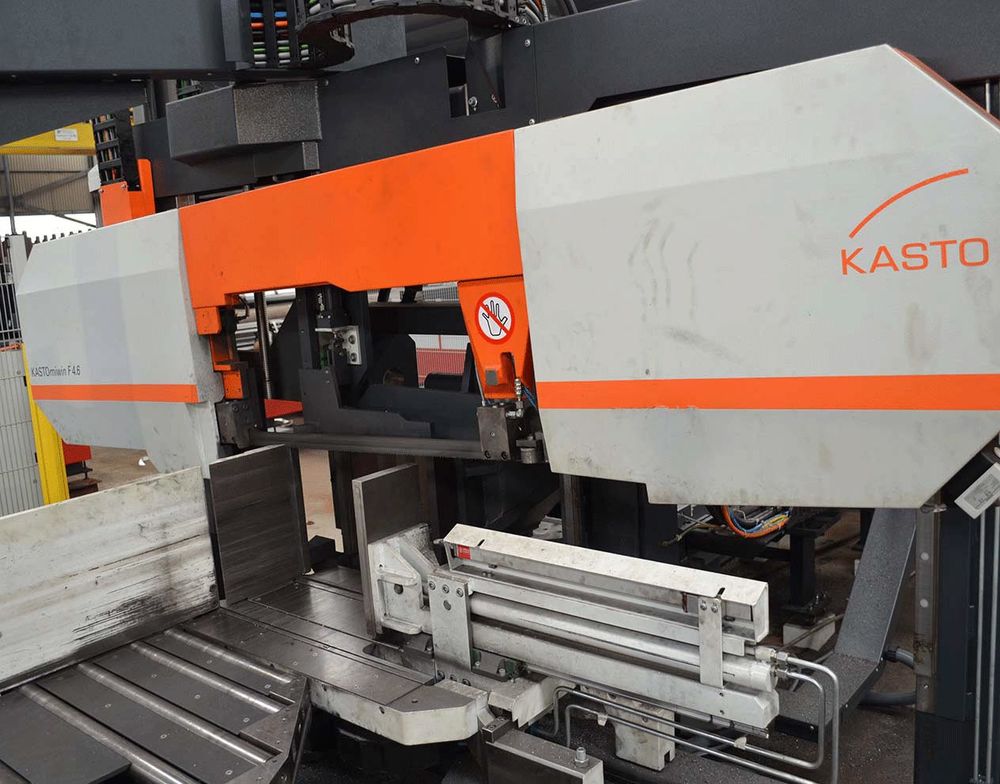 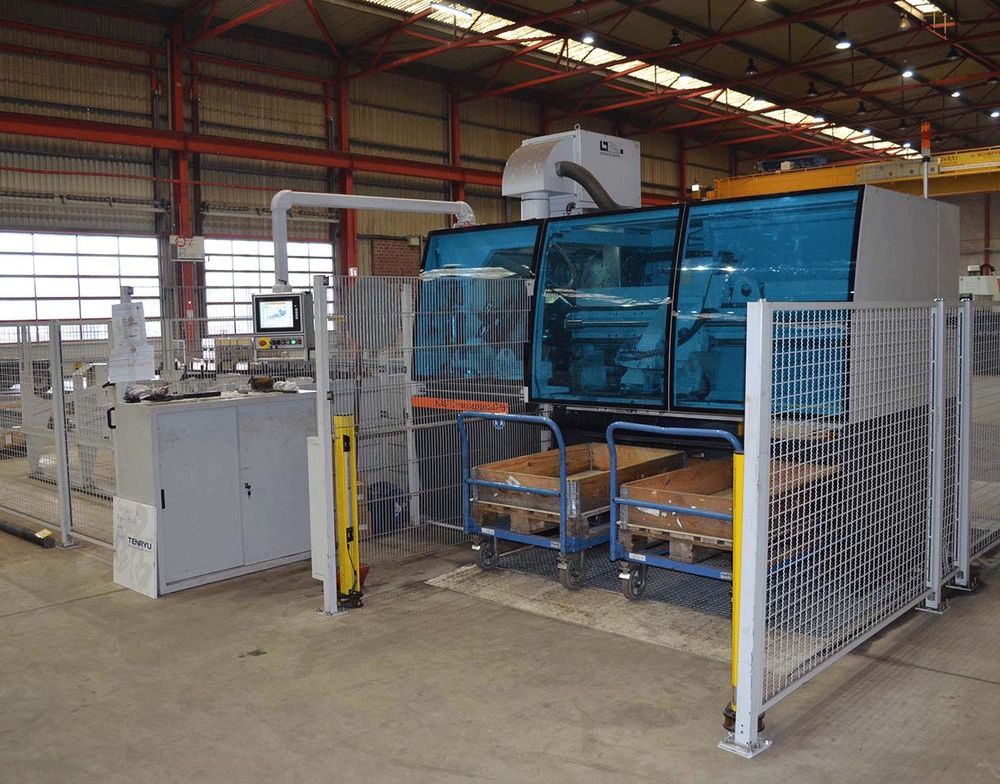 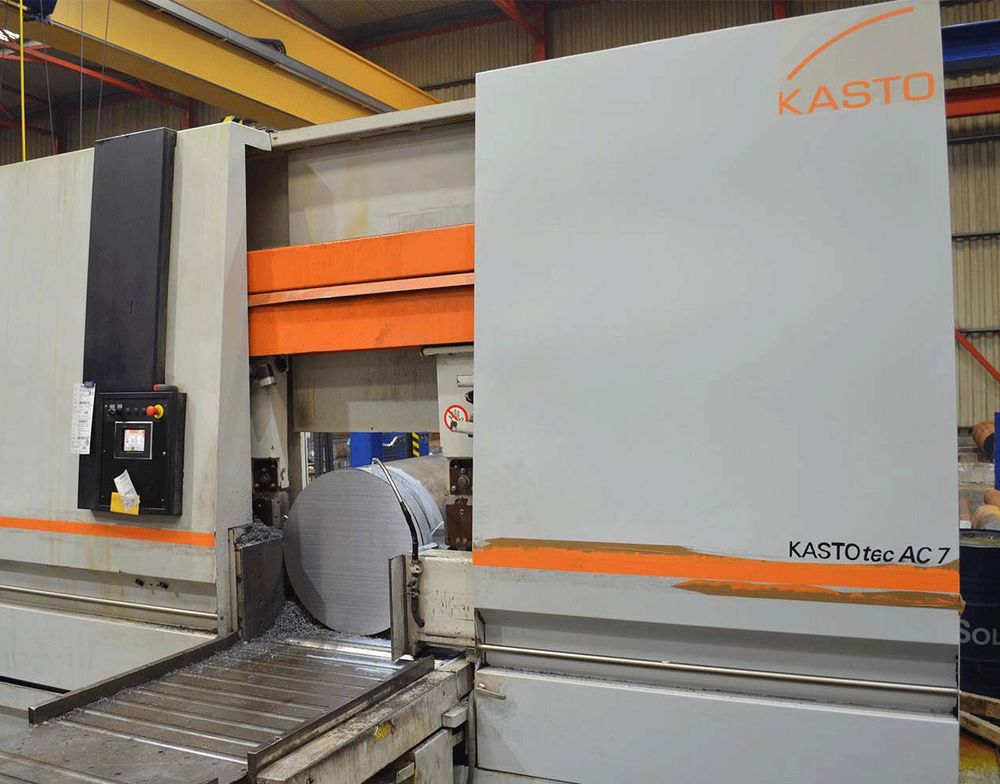 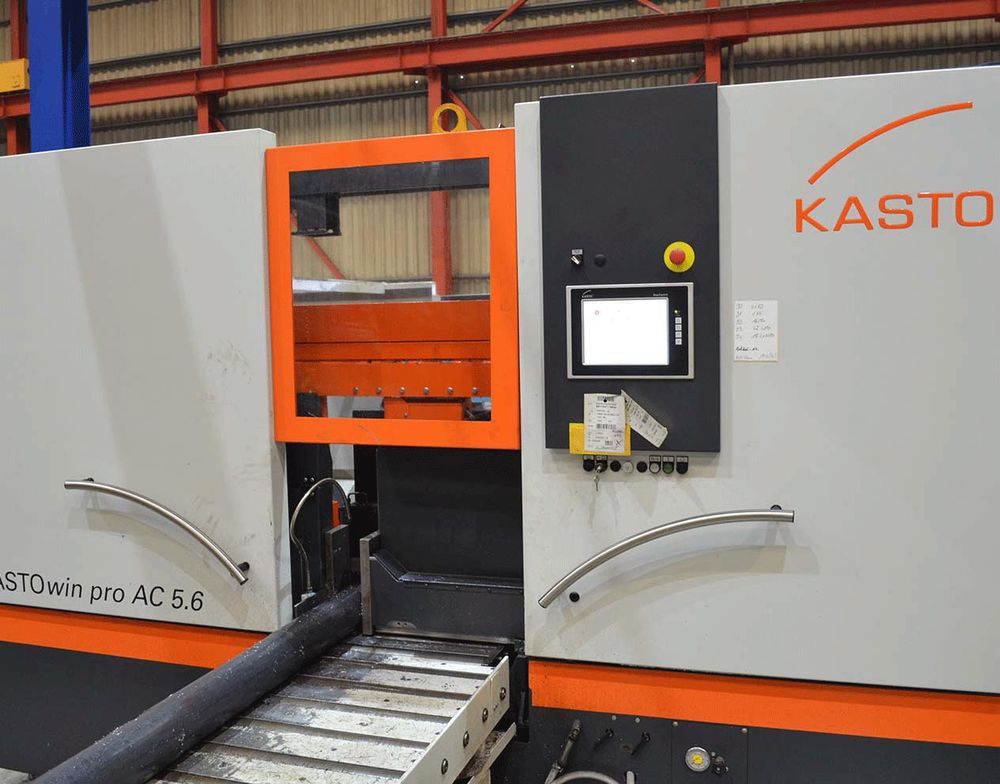 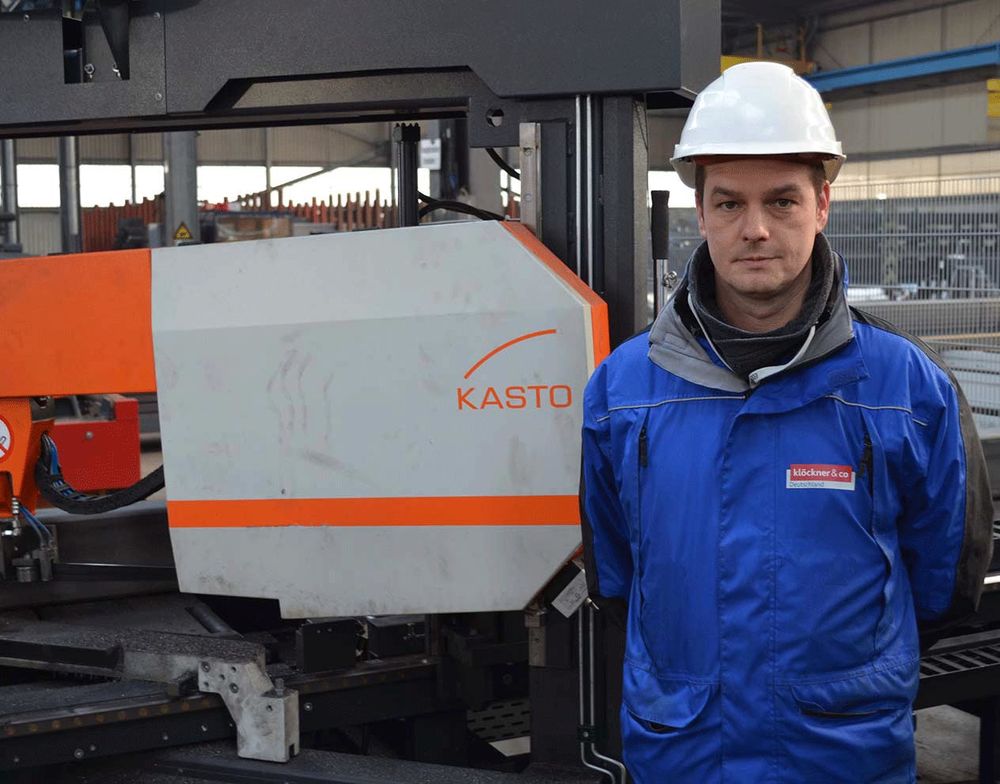 Smaller batch sizes, reduced overall dimensions – and more and more manufacturing steps: these are the requests with which most customers approach Klöckner & Co Deutschland GmbH. Among other things, the steel distributor relies on the double-mitre bandsaw KASTOmiwin to meet these requirements. The machine is impressive thanks to its high dimensional accuracy of all mitre angles and significantly expands the range of services offered by Klöckner & Co Deutschland.

Steel trading in Germany is changing – and has been doing so for quite some time: On the one hand, the competition resulting from globalization which leads to an increase of foreign competitors is getting tougher. On the other hand, the customer's wishes are increasingly complex and more individual. Requests for materials in an unprocessed state and in large quantities are increasingly rare – instead there is a growing demand for smaller batch sizes and processed products. Anyone seeking success in this industry must gradually develop from mere a supplier into a versatile manufacturing service provider.

Klöckner & Co Deutschland GmbH recognised the signs of the times at an early stage. Klöckner & Co is one of the largest producer-independent steel distributors in Europe and operates 15 sites with 1,000 employees in Germany alone. The largest of these facilities is located in Landsberg in Saxony-Anhalt, just a few kilometres away from Halle and Leipzig. Founded in 1992, the subsidiary has grown significantly and is now the most important warehouse for the entire region. The company keeps approximately 18,000 tonnes of material in stock at this warehouse. About 400 to 450 tonnes per day are received and shipped each day – that is the equivalent of 20 to 30 truckloads. 75 employees in production and sales supply a delivery area that extends from Mecklenburg-Western Pomerania to Berlin and Brandenburg, Saxony and Saxony-Anhalt to Thuringia.

To meet the increasing customer requirements and to satisfy the rising demand for processed material, Klöckner & Co Deutschland relies on an extensive machine fleet. In total, the steel distributor in Landsberg has nine saws, one laser beam unit and one foil unit at its disposal. The company has additional capacity for other processing steps at other locations such as Velten in Brandenburg. "We are a full-range distributor and deliver steel as well as stainless steel and aluminium in a variety of dimensions, geometries, and qualities" explained Stefan Kumpf, the Operations Manager of the subsidiary in Landsberg. "Our high level of expertise and flexibility in machining makes us a sought-after partner for our customers."

When cutting the up to twelve metre-long steel profiles, pipes, and solid materials, mitre cuts are more and more frequently requested. Those are cuts in the material that are not made at a "straight" 90-degree angle. Such cuts are made with a specific angle, the so-called mitre angle. This particular task can only be accomplished by using special saws – and one of the saws which Klöckner & Co Deutschland relies on is the KASTOmiwin F 4.6 from KASTO. "Not just any KASTOmiwin is used for this task," Kumpf revealed, "We use the very first model ever produced from this series." The machine optimised for mitre cuts is based on the successful bandsaw series, KASTOwin that is suitable for series and production sawing of solid materials, pipes, and profiles.

How did this come about? There is, of course, a long history behind this: "For years, KASTO has been one of our most important suppliers when it comes to sawing and warehouse technology." Kumpf report. In Landsburg, we already use saws such as a production circular saw from KASTOvariospeed, multiple bandsaws from the series KASTOtec as well as the compact high-performance bandsaw KASTOwin pro. "KASTO first presented us with the KASTOmiwin at a tradeshow. The innovative concept and our positive past experience with KASTO convinced us that this purchase was the right decision." In 2018, the first KASTOmiwin from Achern in Baden-Württemberg made its way to Saxony-Anhalt; two other models were delivered shortly thereafter to other locations of Klöckner & Co Deutschland.

The KASTOmiwin F 4.6 is an automatic double-mitre bandsaw designed for all crosscuts and mitre cuts in steel trading and the workshop area. Its cutting range is up to 460 x 360 millimetres; mitre angles can set anywhere between -45 and +60 degrees. The saw is characterised by a frequency-controlled, infinitely adjustable blade speed of twelve to 150 metres per minute. A cutting strip, which rotates with the saw head, serves as a material support. The cutting feed is carried out via a ball screw; the material feed with a gear rack drive. A hydraulically activated horizontal clamping vice enables optimum clamping of the workpiece: depending on the mitre angle, the complete clamping unit is shifted in front of or behind the cutting level. This enables exact parallel material clamping – and in turn ensures precise sawing results.

The bar stock to be cut is conveyed onto the machine via roller conveyors. The single-stroke of the material feed is 3,000 millimetres. Once the material is positioned, the upper part of the saw including the sawblade rotates automatically until the desired mitre angle is achieved. The cut-pieces are discharged and sorted via additional roller conveyors and transport units. Afterwards, the employees can load them onto pallets either manually or by using a hall crane and prepare them for shipping. The integrated KASTO machine control system, ProControl, ensures easy and safe operation: The user must simply enter the desired cutting parameters for the respective job order. The saw takes care of the rest itself – also thanks to the system, KASTOrespond developed by KASTO, which continuously captures the forces on the tool and intelligently converts them into the optimum feed speed.

Klöckner & Co Deutschland is extremely satisfied with the new mitre saw. "The dimensional accuracy is excellent, even with angles that must be cut to the exact decimal place" praised Kumpf, the Operations Manager. "As a result , we are now able to accept orders that we would have had to decline in the past." The steel distributor is just as impressed with the performance and reliability of the KASTOmiwin. "Of course, now and then there were minor challenges especially at the beginning that had to be mastered – after all, it was the first saw of its kind", explained Kumpf. "During this time, it was a huge benefit that KASTO service technicians are located throughout Germany – for example, in Thuringia, which is not far from here. The service technicians were always quickly on-site whenever needed". Furthermore, Klöckner & Co Deutschland, as a pilot user, had the opportunity to incorporate requests and experiences from the practical everyday working life into the development of the saw – a real win-win situation.

For Stefan Kumpf, the KASTOmiwin is an indispensable tool in everyday working life. He emphasised, "The saw is an important tool for helping us to meet the variety of wishes from our customers and to be competitive on the international market in the long term." "Besides, with KASTO, we have a trusted partner on our side, whom we can fully rely on." For the future, Kumpf anticipates that Klöckner & Co Deutschland will further expand its production spectrum to offer an even broader range of services. "Should we require additional sawing machines, we will definitely turn to KASTO."